What Goes Around Comes Around

You should know that.
What goes around comes around, Yeahhh…

My Mamaw used to say, “What goes around comes around.” (She also said, “If you can’t say anything nice don’t say anything at all”, which I chose to ignore because I was afraid I’d never be able to utter a word!) 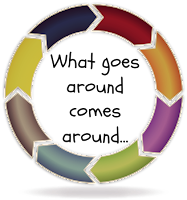 What does it mean? Basically it means that the things you do (to others) will come back to you. It ties into do unto others, we reap what we sow, karma. Apparently, with all the quotes addressing the situation, it used to be more important or at least in more people’s thoughts than today.

Bullying is a hot topic lately. There are many tragic stories of young people being bullied and the dire actions sometimes taken to end the torment. Sadly, adults are not immune. Bullies exist in the workplace, just as they did throughout the 12 or so years of school. They may not be quite as obvious as they were then, but they are definitely there.

I’m not one to wish ill will on people. However, there are times when I think it’s acceptable to want people to get what’s coming to them. It was pure luck that I was able to witness this first hand. And I enjoyed every second. Do I feel guilty for being happy? Not a bit. Do I feel guilty that a couple of us went out and actually toasted to the event? Well, maybe a little.

Things are back to normal now. Well, it’s better than normal, for me anyway. And hopefully it will stay that way. But the old bullies are replaced by new ones. And I see the fresh victims and know they pretty much just have to grin and bear it. And my heart hurts for them.

I really intended that this year would be different, in blogging anyway. I thought I’d set up a schedule and post more frequently. Alas, life happens and maybe I did heed my Mamaw’s advice. If I don’t have anything to say I don’t say anything at all!

My DS brought me roses for Valentine's Day. Sweet! And the best present of course is our sweet Belle who turned 5 years old!

Getting back in the swing of things is harder than it sounds! And I’ll try to post more often. And knit more often! Here’s a picture of a scarf for a friend. She bought the yarn and asked me to make her something. I don’t usually do that, unless I like you, and I happened to like her and it was a pattern I wanted to try, so it was a win win.


I also did some simple little hearts to get into the spirit of Valentines. Somebody liked them so I gave her a strand. Something so simple and she said it really made her day! And who knows? It can always come back around!

I had a couple of ‘free’ tickets on Southwest that were fixing to expire. These are airline tickets earned with points from other travel. I hated to lose them but I’d let the deadline slip up on me and I didn’t know if I could swing a trip during the block of time I had or not. Besides that, I didn’t have anywhere to go! I thought about it and decided maybe a visit with my sister Judi would be fun. I asked her if she’d be able to get off work if I came over and she said yes. The trip was set.

We had no agenda. That meant staying up late and sleeping in. It meant shopping. And it meant eating out at places unknown to me. No pressure. No stress.

Judi contacted some childhood friends and made a date for us to meet them for lunch. We entered the pizza parlor and there they were, looking pretty much like they always looked!

When we were growing up, we lived on a corner of a ‘T’ intersection. Judy and Jana lived across the street. We spent hours together, playing with troll dolls, skating, and climbing the willow in our front yard. Sometimes we played at our house and sometimes we played at theirs. Jana is the same age as my sister Judi, and Judy is a year or so older than me.

Judy had beautiful, long, shiny, straight hair. That was the fashion back then. She wore it parted down the middle. My hair, on the other hand, was curly. When I tried wearing it long it looked much like Tiny Tim’s hair looked. It wasn’t attractive.

Of course, I wanted smooth, vertical hair. Judy and I tried many things to make it straight. She helped me iron it, using a real iron on an ironing board. I guess that was pre flat irons! And it didn’t work. We rolled it on orange juice cans. That made bigger waves than I already had. Plus, it was heck to sleep on! We sprayed it with Knox Unflavored Gelatin. That sounds horrible but really it was probably like a spray gel. It made my hair stiff, but alas, it was still curly.

We were both in constant search of ‘the’ technique that would make my hair straight! One of the most bizarre things we found was for me to sleep with a nylon stocking on my head. Yes, really. I would squeeze it down over my wet hair. My nose was squashed and my eyes were either open for extended periods or closed. It was difficult to blink. It wasn’t comfortable, and there were all kinds of indents pressed into my face upon awakening. One night, as I was preparing this unique costume before I went to bed, my dad came in. He looked at me, shook his head and backed out of the room!

Judy was an expert on the piano. I suppose she took lessons, but I don’t remember for sure. It seemed to me, she could play anything. One song that was especially pretty was “Bridge Over Troubled Water” by Simon and Garfunkel. We had a piano too, but nobody played it. At least not like Judy played. I really wanted to learn that song so she hand copied the entire score. I didn’t realize it then but that was amazing in itself!

We visited as we ate our pizza, caught up and reminisced. It was like the old days, minus the troll dolls! My hair is still curly. Judy’s is still straight. Some things never change. It’s good to have longtime friends with whom you can still talk with, laugh with and remember the good (and a few bad) times!

Time passed too quickly and it was time to return to work, a necessary evil. I packed, including the extra suitcase I had to borrow, tucked away the memories we made, and went to the airport. I was already thinking about the next time we’d be able to spend time together.

I finally got the rest of my packages from the FB game sent off. My sweet friend Debi got the scribble lace scarf/shawl.

My niece got the drop-stitch eternity scarf. I think they were both pleased! I hope so anyway!
Gold days.
Days I'll always treasure…
Posted by Knitrageous at 9:08 PM 4 comments