Oh Lord, won't you buy me a Mercedes Benz ?
My friends all drive Porsches, I must make amends.

It was the end of a special weekend. Alan had to present at a conference in Lubbock so we decided to go a couple of days early. It would be a good trip for one of the grands. Evan had been feeling neglected so he went with us.

He’d had a great time, swimming, watching movies, eating from the vending machine and sleeping in until he was ready to wake up. He got to pick where we went, what we did and where we ate. He was getting the royal treatment! The presentation was Monday morning so Evan was planning to lounge around, take one last swim and generally milk Mamye all he could before he had to go back home and be a regular kid.

He slept in that morning, too late to swim. Instead he decided he wanted to go to Olive Garden for lunch. That sounded fine to me. He showered, dressed and we packed. He changed his mind and wanted to go to Golden Corral instead, which wasn’t as fine to me, but what the heck. It was his weekend.

As we gathered the last of our belongings to take down to the car I had him search, once again, just to make sure no treasures were left behind. He picked up the hotel pen and put it on the table. I asked, “Do you want that?” thinking it would be a little souvenir he would remember the weekend by.

The last of the parcels in the trunk, seatbelts fastened, preparing to take off, Evan tells me, “This pen doesn’t work. I’m throwing it away”. As I look over at him in the passenger seat I see an ink mark by the arm rest. “Evan, be more careful please”, I tell him. I got the hand sanitizer (because I vaguely remembered that alcohol might take off ink) and leaned across him to wipe the stain. He moved over and I saw another mark by his leg on the seat. Exasperated I put the car in park and tell him to get out so I can clean up the mess.

He did as he was told and my heart went to my throat. (I actually googled to make sure I was relaying the right emotion. To have one’s heart in the throat means to be full of apprehension, excitement, or fear. To have one’s heart in their boots or feet means to be depressed or down-hearted. I can truly say, from the bottom of my heart, that my internal organ traveled the gamut!) There on the seat behind him was a HUGE ink blob.

I was sick. Truly, I felt like throwing up. This was my new car. It’s the car on which I faithfully make mammoth monthly payments. It’s the car with light colored leather seats, now decorated with ink blots that would make Rorschach proud.

Miraculously, I stayed calm. I tried the hand sanitizer again, and removed a small amount of ink. But it was obvious there was so much it wasn’t going to work. I beseeched my sweet little car’s GPS system (which is NOT very good by the way), and found an auto part store not too far away. My thoughts were to quickly find some kind of cleaner that might work. I went in and asked the two experienced men at the counter if they had anything that could help. They didn’t. We traveled to another store I saw. This man didn’t know of anything either. He did, very kindly I might add, spray some product onto a rag for me to try. I gave it a shot and when it didn’t work, was thankful that he let me try before I had to buy. He told me to stop by the Mercedes Benz dealer, a few blocks away, and ask for Craig in parts to see if he might know of something. When Evan got back into the car I noticed another large spot. He had ink on his arm and it had rubbed onto the seat. Frantic, I thanked the man and drove to the dealership.

I didn’t see a parts department but did see the service department as I pulled up and parked. I went in, explained my dilemma and asked for Craig. Craig wasn’t available but a very nice man, armed with a can of Mercedes seat cleaner came to the parking lot with me.

He was so considerate. Here he is, in the parking lot of an elite automobile dealership scrubbing the seat, not of my Mercedes, but of my Honda Accord! I couldn't help but see the humor! He sprayed the cleaner and although the ink seemed to be smearing it was getting lighter. But it was definitely still there. When he’d done all he could I thanked him and he went back inside. We headed to Walmart for more hand sanitizer, rubbing alcohol, hairspray and a towel. Did I tell you I was desperate? I tried them all but to no avail. The ink was there. Resigned, I covered the seat with the towel.
A week or so later the towel fell down. I glanced over at the blemished seat and the stain seemed to be lighter. Could it be? It was probably just the angle. I pulled the towel back up and tried to block it from my mind! Another week went by and the towel again fell down. The stain was definitely lighter. A few days later I looked and one of the stains was gone. The other was faded quite a bit.

It’s been almost a month since the traumatic event. I have no idea what’s in that Mercedes cleaner but the ink is faded and the last spot is almost gone. It’s a miracle! I wish I’d gotten the name of the nice man who helped me. I’d write him a thank you letter.
I’ll probably never get the chance to own a Mercedes. But if I do I’ll buy it at Alderson Mercedes in Lubbock.

Worked hard all my lifetime, no help from my friends,
So Lord, won't you buy me a Mercedes Benz ?

I have some beautiful handspun yarn from my friend Brenda.
I've just finished the Quaker Yarn Stretcher on Ravelry. All that’s left is the blocking!

So oh Lord, won't you buy me a Mercedes Benz ?
That's it!
Posted by Knitrageous at 4:06 PM 5 comments

A short time ago, I attended a conference held at the Galleria, in Houston. If you have no knowledge of the location, it’s a giant mall. In fact, it’s the largest shopping center in Texas and fourth largest domain nationally. There are two hotels, one on either end of the mall, and the middle is about 400 great stores. There are restaurants as well. I found there was no need to leave the place at all.

One of the hotels has a convention type facility located directly across the mall and most of the meetings are held there and in that hotel. Attendees stay in either that hotel or the other one at the opposite end of the mall. I have always managed to lodge in the hotel closest to the rooms holding the sessions. That is until this year. I don’t know if I was ‘overflow’ or if I accidentally asked for the wrong hotel. Whatever the reason I ended up at the far end compared to where the majority of my friends were staying.

Actually, I had a far nicer room than I’d ever had at the conference hotel. It was newly renovated and was spacious and clean. And the elevators were the most unique I’d ever seen.

Upon check-in the clerk told me to go to the elevators and using the keypad enter my floor number. I did as instructed and there entered my fascination. On the outside of the elevator bank was a number pad. Above the number pad was a screen. After your floor was entered a letter and arrow flashed on the screen instructing you to the elevator that you would enter. There was no panel above the lift to show what floor the car was approaching or where it came from. 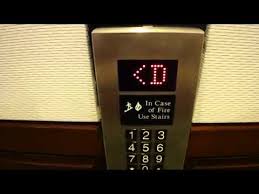 I punched my number and entered when the doors opened. Inside there were no buttons but the open/close doors and the emergency buttons. It was eerie. It wasn’t until the second or third trip up that I noticed a thin strip beside the door that noted what floor was selected.

One night I came in after dinner to go up to my room. As I approached the number pad I was puzzled. My number wasn’t listed. Instead it was a keyboard that resembled a telephone dial pad. I stood there for a couple of minutes trying to decide what to do. An Asian man, wait-staff probably, approached me and asked if I had a problem. I explained that I needed to get to the 17th floor. He looked at me as if he couldn’t quite believe anyone could be that dense and explained that all I needed to do was punch the number one and then the number 7. Oh.

Feeling completely ignorant I climbed in and went to my room. Embarrassed, I thought about why the obvious hadn’t occurred to me. My logic, although there wasn’t much, was that some elevators are programmed to only go to certain floors. And I was positive the first time I punched in there was a number 17, not a combination of numbers to make the number 17. Yes, that was probably it.

The next day I went on a hunt to find the original keypad I had punched upon arrival. It was gone. Apparently I just thought I had pushed a button that said 17. Then again maybe the Saki Sangria had something to do with it. Regardless, I really loved those elevators.

I’ve wanted to make this little bird for a while now. My friend’s birthday was coming up and I decided she needed one. I’d found a bowling pin that she wanted but I wanted to yarn bomb it. The bird was perfect!

I made the first one just to see how to do it. He’s kind of cute.

Then I gathered the materials for hers. I really like how it turned out. She took this picture. I think she liked it too!


Never here or there,
On the ground or in the air.
But I'm still riding elevators...

Posted by Knitrageous at 8:34 PM 4 comments