Turn and face the strange.
Don't want to be a richer man,
Ch-ch-ch-ch-Changes…

Just gonna have to be a different man,
Time may change me.
But I can't trace time.
I spend a lot of time in front of a computer screen and run across some pretty useful (and some useless) information on the Internet. One day I read a ‘tweet’ talking about a project called ‘Knit-a-Year’. I was intrigued. The instructions were easy; cast on some stitches, knit at least two rows every day using a color that fits your mood or feelings that day. You could journal or blog, as a kind of documentation of your feelings. I chose to blog. 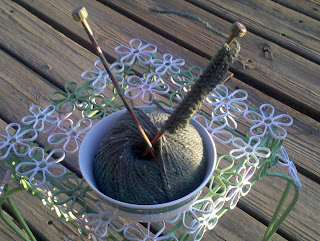 When I told people about the project, more often than not I got a blank stare. Why would you want to do that? What is it for? What are you going to do with it? There were a few who thought that it was a fun, interesting and even cool idea. I guess, on the whole, it’s a little ‘out there‘ for the average person, especially if the person doesn’t knit or worse, isn’t creative. 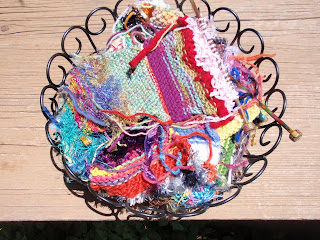 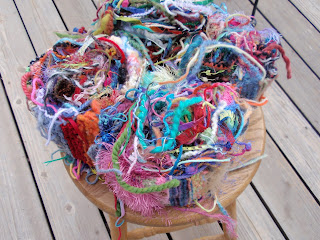 I chose to participate in this project because I thought it sounded interesting. As is often sometimes the case, I didn’t follow the instructions exactly. I can call it creative license. Yeah, that sounds good. Instead of one long continuous strip, I chose to break mine into ‘seasons’. I have four strips, one for spring, April through June, summer, July through September, fall, October through December, and winter, January through March. It doesn’t quiet go along with the seasons but it’s close. The stitch the original project called for curls in on itself. The result would be a very long skinny tube. That didn’t appeal to me at the time so I made mine wider and chose a stitch that would create a flat fabric. 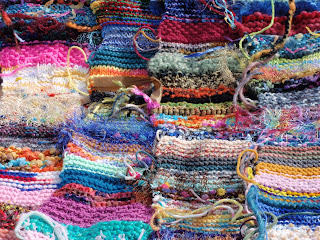 I never found this project to be a chore. At first I made it a point, no matter what, to knit on it each day. But I travel for my job and carrying a bunch of different yarn with me didn’t work. I wanted to stay with the spirit of the project and choose something that portrayed my mood at that time. So I couldn’t pack some red, yellow, green, etc., because I might not have felt red, yellow or green during the time I was gone. Instead I would record how I felt then pick the yarn when I got home. If I did have a color in mind I’d make a note of it as well. I would usually knit when I was alone, at night after everyone went to bed. It was a peaceful time and I could think (or worry) about whatever crossed my mind. 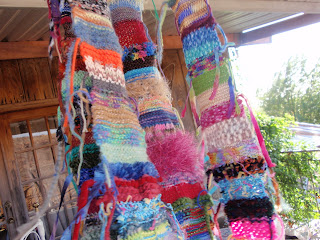 Perhaps the hardest thing was to find the yarn I wanted to use. I have quite a bit of yarn. Probably too much, depending on who you ask! At the house we did some rearranging and I got some cabinets to store all the yarn in. To get it from the upstairs room to the downstairs room required putting it in boxes, bags, or whatever was available. Some of it is unpacked but quite a lot isn’t. I’d want a certain yarn and wouldn’t know where it had been packed. That frustrated me. In the beginning I decided I was not going to duplicate the yarn used. I could have done that easily. But the packing and not being able to find things plus trying to keep up with what had been used changed my mind. Instead I made sure that each strip never had repeats of the same yarn. 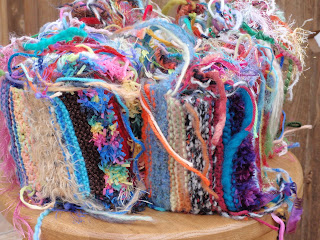 The journaling was optional. At first I went into a lot of detail about why I chose the yarn for that day, what it was, and why. Later I cut some of the detail. I decided to write a blog and as I wrote sometimes I wrote too much before I even got to the knitayear. That part was for me anyway. I didn’t figure too many people really cared why I chose purple boucle or not! I did find out I enjoyed the writing and will continue to blog. 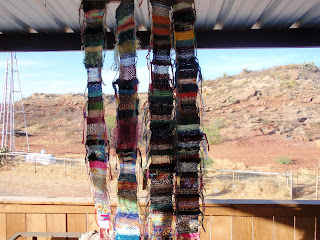 Here are some interesting observations I made during the year and after completing the strips. • The first strip is the longest but the last strip is not the shortest. The shortest one would be ‘fall’, with Thanksgiving and Christmas included. I think it was a time thing and I just didn’t add as much on each day because there were a lot of other things going on.
• I tend to be influenced by the color of the season. The fall strip, especially at the beginning had a lot of oranges and browns. There’s a block that’s got a lot of red and green and white in it. The spring strip had a lot of bright colors, cheerful, which reminded me of spring.
• The same color didn’t mean the same mood. For instance there were times I used blue when I was happy and times when I was sad. For the most part though, if it was really a bad day there’s probably some really dark yarn, like black or brown included. I couldn’t really determine a ‘happy’ color except that it was bright.
• I like variegated yarn. That means it’s one strand with different colors. I can’t help it. When I look at yarn those jump out at me. I think maybe it’s to do with holding my attention. When the colors change it keeps things interesting.
• I like bright colors. It doesn’t seem to be a particular bright color because I have a lot of all of them except possibly yellow. My mother always told my sister and I we couldn’t wear yellow so I shy away from it. Turns out it was her who didn’t like and couldn’t wear yellow but I was already conditioned!
• I like texture. I have a lot of novelty yarn, fun furs and the like left over from the scarf rage a few years ago. But I also have a lot of ribbon, thick and thin and boucle yarns.
• I don’t make socks but I like sock yarn. There are beautiful colors in sock yarn. The knitayear didn’t always capture the changing colors because it was such a short section of knitting.
• Looking back, if I had left the strip as a tube I could have wound it into some kind of rug. Oh well. 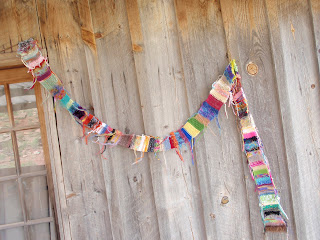 Overall I’m glad I participated and after thousands of stitches I’m pleased I completed this project. I got personal satisfaction from it. I know for sure that I can stick to something and get it done, especially if it is important to me. I enjoyed the time I had to set aside to think about the day. I might even do it again, or something similar anyway. If I do I’ll plan a bit more. Maybe make something specific that was big and would take a lot of time. At one time there was talk by the originator of the project, of an international display of some sort. If that comes about I will take part. 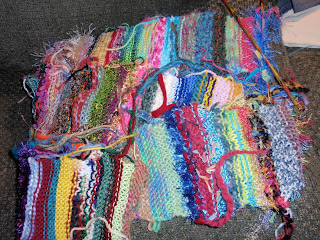 I’m still not sure what I’ll do with the strips. I could use the strips around the top of the wall as a border or just hang them on the wall as some kind of weird art. Or I might just put them in a box and stick it somewhere so it can be thrown out when I die! I could sew them together and put them across the bottom of the king size bed like hotels do with that little piece of cloth. I’m not sure how well that would go over! I’ll just hang on to them until I decide. 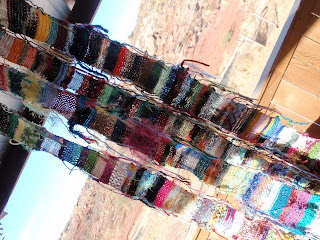 Color is an important part of our lives. What we choose is not random, even though putting it all together, side by side every day looks abstract. Color holds individual meaning to us. The colors we choose give personal insight about what is going on inside, our innermost feelings and emotions. That’s really what the knitayear was about. Knitting was just the way I chose to express it.

Still don't know what I was waiting for,
And my time was running wild.
A million dead-end streets and
Every time I thought I'd got it made.
It seemed the taste was not so sweet
So I turned myself to face me.
But I've never caught a glimpse
Of how the others must see the faker.
I'm much too fast to take that test.
Ch-ch-ch-ch-Changes
Posted by Knitrageous at 3:36 PM